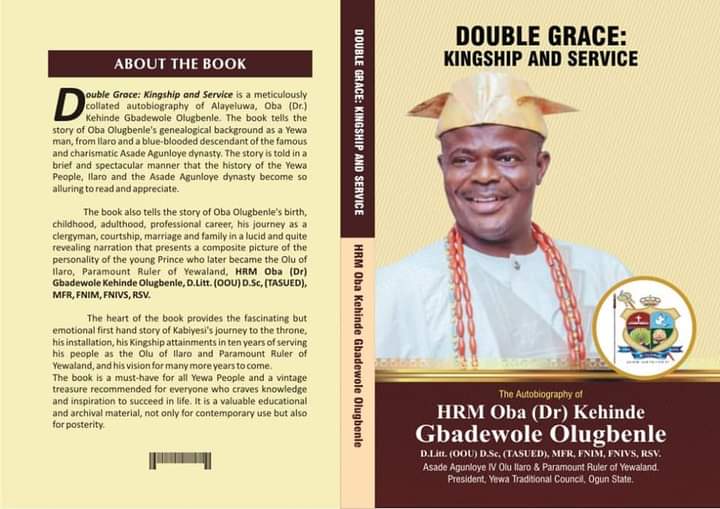 The General Overseer of the Redeemed Christian Church of God (RCCG), Pastor Emmanuel Adeboye has described the Olu of Ilaro and Paramount Ruler of Yewaland, Oba Kehinde Gbadewole Olugbenle, as a servant-leader who, like the biblical King David, is found out, trained, equipped and ordained by God to be a worthy example to lead his people.
Pastor Adeboye gave this view in a Foreword he wrote to the autobiography of Oba Olugbenle, titled; “Double Grace, Kingship and Service”, which was formally presented to the public in Ilaro as part of the grand-finale of the monarch’s 10th Coronation Anniversary.
“One of the lessons to learn in this autobiography is that when a man offers himself as a servant-leader, the resultant effect is unity among the people which inevitably results in progress”, Pastor Adeboye said, adding; “we also learn that grace inspires a socio-political structure that engenders development and consequently ensures the institutionalization of such structures”.
Pastor Adeboye said he recommends the book without any restraint and believes that it will be a source of blessing and inspiration to many. 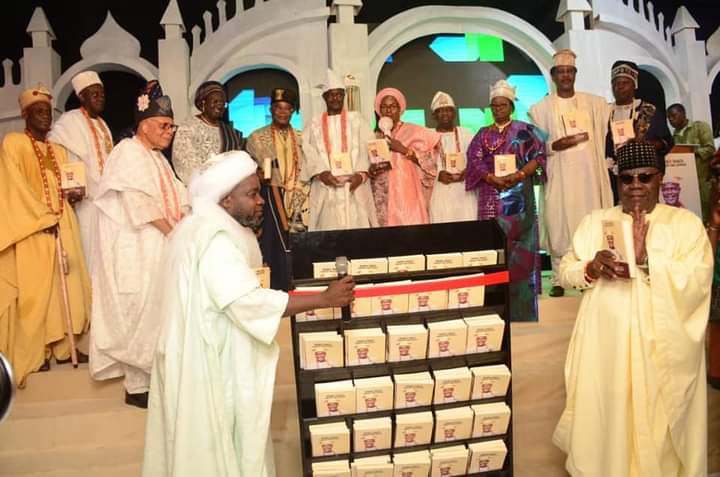 In his comments, the Ooni of Ife, Ooni Adeyeye Enitan Ogunwusi said Oba Olugbenle is “an epitome of greatness who brought dignity to royalty with which he has been presiding progressively over the affairs of the ancient Yewaland in the past decade”.
The Alake of Egbaland, Oba Adedotun Aremu Gbadebo, said he has found Oba Olugbenle to be ” a thoroughbred , simple and straight forward person, totally devoid of any arrogance”, adding; “I think he has been an asset to the throne he has come to occupy. He is doing well and he should continue to do what he has been doing very well”.
In his remarks, the Odole-Odua of the Source, Ile-Ife, Sir Kensington Adebutu said there was no gainsaying that Oba Olugbenle’s tenacity of purpose, exemplary leadership and unwaivering commitment to take the people of Yewaland to the promise land have combined to bring tremendous achievements to Yewaland since he ascended the throne.
In a letter written by Dangote Cement, Ibese, signed by the company’s Group Executive Director, D.V.G Edwin , Oba Olugbenle was commended for using the instrumentality of his office to maintain peace, harmony and order in the Yewa communities which has made the company to enjoy unlimited cooperation of the people.
“As an organization, we are proud of the wise counsel and robust support we have enjoyed from Kabiyesi and the resultant support and cooperation we have enjoyed from adjoining communities in Yewaland under the exemplary leadership of the Paramount Ruler”.
The Osile of Oke-Ona Egba, Oba Adedapo Tejuoso in his tribute wrote; “the events surrounding your birth and your life journey indicate that you are a chosen king from the womb by God to rule your people and bring light to your subjects. Chosen, not just to rule, but to affect and touch lives positively in Yewaland”.
Dignitaries at the public presentation of the book include Her Excellency, the Deputy Governor of Ogun State, Engr. Noimot Salako-Oyedele, Are Kola Oyefeso who represented Sir Kesington Adebutu, Engr Tukur Lawal who represented Alhaji Aliko Dangote, the Akarigbo of Remoland, Oba Babatunde Ajayi and the Alake of Egbaland, Oba Adedotun Aremu Gbadebo, among others.
The 260 page autobiography, which has details of the opinion and eulogies of many personalities published in Chapter Ten of the book, was edited by Rotimi Oderinde, Dapo Oke, Femi Dokunmu and Yemisi Oladejo.