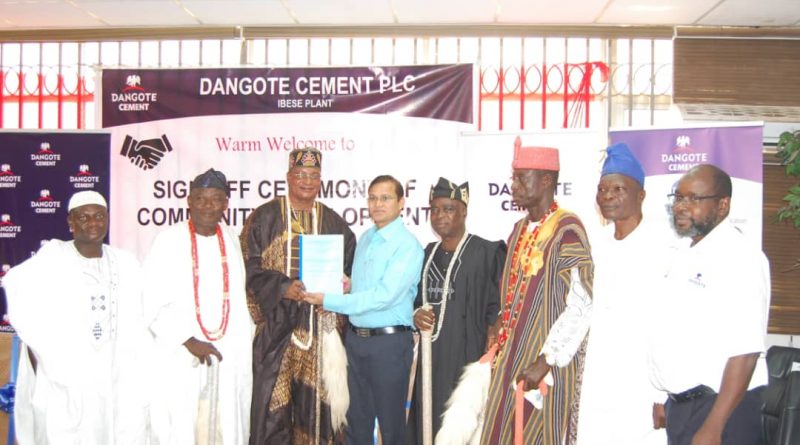 The ceremony, which held at the Ibese plant of the company had in attendance the Plant Director, Azad Nawabuddin, Snr. General Manager, Head Community Affairs and Environment, Engr. Tukur Lawal, representatives of the Minister of Commerce & Industry and Ogun State Government, Chairman of Yewa-North Local Government Area, Hon. Gabriel Ogunyomi, some of the traditional rulers & baales of the host communities of Ibese, Iboro, Imasayi, Aga-Olowo, Onigbedu and Ijoko-Orile, etc, members of the Joint Consultative Committee, women and youth leaders of host communities and other stakeholders.

With the signing of the fresh agreement, each of the host communities will, within the next five years, (2022-2026) be entitled to specific projects that will add value to the lives and livelihood of their people.

Speaking at the ceremony, the Olu of Aga-Olowo, HRM, Oba Kayode Adio Kusoro expressed deep appreciation to Dangote Cement management for its warm reception and commitment to its Corporate Social Responsibilities for the host communities. While commending the company’s openness and transparency in the all inclusive agreement signing process, the monarch, however, noted that the contents of the agreement should have been jointly prepared by the representatives of the host communities and management of Dagote Cement. He therefore, expressed the hope that the company will keep faith with the contents of the agreement.

In a chat with our reporter, David Iroko after the  ceremony, some of the traditional rulers expressed their satisfaction with the fresh agreement that will accelerate socio-economic development of their domains.

In his remark, the Aboro of Iboroland, HRM, Oba Abayomi Salako expressed his satisfaction with the fresh agreement which he considered to be better and more inclusive that the previous ones. He says, “Though the fresh agreement is limited to the existing seventeen host communities and cannot cover the entire Yewaland for now but it is subject to future amendments that will conceive of legacy projects for the benefits of the people of Yewaland”. The monarch reiterated the fact that Danogote Cement, Ibese, at the moment carries out its CSR in line with the Nigerian standard limiting its community development activities to the host communities. He however and expressed the hope that in the not too distant future, and in compliance with the United Nations specifications of 21 kilometre radius, such developmental projects will be extended to cover many Yewa communities. While appealing to Yewa communities not captured in the current 5 year agreement to be patient with the company, citing huge financial commitment of the organization to the state’s Internally Generated Revenue, IGR, as a possible hindrance, Oba Abayomi was was full of gratitude to the cement company for keeping faith with its Community Social Responsibilities to the host communities.

In his own assessment of the event, the Olu of Imasayi, HRM, Oba Lukmon Olalekan Adeleke Kuoye said that the signing of the new agreement was a clear departure from the past exercises which were not all inclusive. The monarch said that all the representatives of the host communities and stakeholders were involved in the review and signing of the fresh agreement.

HRM, Oba Rev. Mathew Alabi Ewedairo, the Awijako of Ijakoland, in his own comment, expressed the fact that the signed document was intended to accelerate socio-economic development of the host communities and that he has unflinching trust and confidence in the management of Dangote Cement Plc, Ibese to live up to their promises as contained in the agreement.